I was at a party this past weekend in NYC. It was held at a friends house who I’ve given countless fitness tips to over the years.

Of course we ate, drank and had a good time.

The best part came when he went to the kitchen and pulled out a bag of green apples to show myself and the group.

He went on to explain that he had read about how they can help quell cravings in our weight loss program.

Covered In This Article 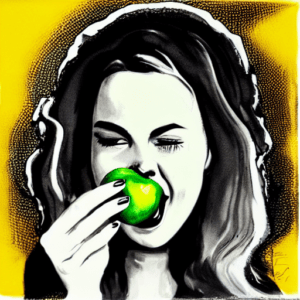 He said he tried it last week for the first time. He was going out with his wife for dinner at a fancy Italian restaurant- his favorite.

When he was getting dressed in his “going out gear”, he noticed his pants fit a bit tighter than before.

Needless to say this frustrated him.

But he turned that frustration against itself and made some wise choices.

He remembered what I had said, that if you eat a green apple or two before going for a meal, you’d have less desire to binge.

So sure enough, on the way down town to the restaurant in the West Village, he picked up 2 green apples at the stand on the corner. He chomped them both down in the cab.

Here’s what happened- not fully believing in the power of the green apple just yet, he ended up ordering baked clams and a plate of Chicken Parmigiana that came with a huge plate of pasta with sauce. (Not to mention the bucket of fresh bread on the table).

The Green Apple (mini) Project Results? It turns out that eating green apples strategically can help you…

He ate all the clams, half of the Chicken Parmigiana plate, no pasta and no bread.

He was excited that he had no desire for the rest of the food. He probably saved himself 800 calories!

Another benefit he (and his wife especially) enjoyed was that after dinner, he wasn’t full and bloated from an over log of carbs. They went out to a club and danced for a few hours.

Sounds like the Green Apple (mini) Project was a success to me.

This brings me to another moral of the story here.  It doesn’t necessarily take a huge overhaul of your eating habits to create small consistent changes in your body.

Don’t go crazy changing your entire lifestyle in one day. There’s no need to decide you’re going to cut out EVERY bad food from here on out. You immediately put yourself in a position that is difficult to operate from.

The better way of going about losing weight is to change small factors of your diet each day. It could be something as small as an apple of two- like my friend has realized.

He saved himself a few hundred calories with one decision.  If he were to implement one such decision each day, he’d be losing fat regularly- without a drastic lifestyle change.