What if I told you that there was a miracle supplement out there that could help you blast off the pounds, had no side effects, was readily available, and (best of all) F-R-E-E?

You and all your closest friends would likely be foaming at the mouth and ready to rush out and buy it by the box load.

And I’m sure one of your financially savvy buddies would make a beeline for the computer and make some surreptitious investments on his eTrade account.

Well, this amazing supplement does exist. And no, it’s not exactly free, but it’s close.

The Most Important Supplement

The A#1, numero- uno, all-important, paramount, top-of-the-heap supplement we recommend for your weight loss efforts is WATER.

What is it about plain-ol’ water that puts it ahead of protein powders, fish oil, creatine, metabolic accelerators, or any other supplement out there?

If you don’t take fish oil for a week, the worst thing that can happen is that you compromise fat burning a little or that your mood might be less than optimal.

If you don’t drink water for a week, however, there’s a strong likelihood you’ll die.

Of course, it’s common knowledge that water is necessary for good health and all – but let’s cut to the heart of the matter.

What weight loss benefits can drinking water confer upon us?

Here’s a short list of weight loss benefits that water gives to you:

(i) Drinking water actually burns calories. A significant amount of them, in fact.

I’m sure you’ve heard this on other sites and thought to yourself, “Yeah, right. How can drinking water make a difference in calorie burning?”

Well, a study from the Journal of Clinical Endocrinology and Metabolism found that metabolic rate actually increases by a whopping 30% after drinking just 17 ounces of water.

The majority of the metabolic increase came from warming the water to body temperature.

Being that it requires roughly one Calorie of energy to heat an ounce of water to body temperature, drinking a gallon of cold water daily can result in a net calorie burn of over 120 calories!

That’s something to tip your glass to.

Does it have to be pure water?

Unfortunately, the answer is yes.

Another study (this time from the folks over at Charite University Medicine in Berlin) compared the metabolic boost from drinking a pint of pure water against drinking the same amount of an isotonic saline drink (i.e., water with some salt added to it), and there was no comparison.

The pure water caused a 24% boost in metabolism; the saline drink caused none.

One of the best ways to kill a hunger craving is to drink a tall glass of water. By temporarily filling out your stomach, your hunger cravings diminish.

You can use this method to stop your inner Tasmanian Devil long enough to make sure you’re mindful of your food choices and to prevent yourself from bingeing on foods that don’t support your weight loss goals.

Did you know that your body uses roughly a liter of water to go about its daily business? If left unreplaced, it’s easy for you to slip into mild dehydration, and that’s a death knell for fat-burning.

Just 1-2% dehydration can cause your fat-burning machinery to stop in its tracks.

Here’s why: Fat burning is not a priority to your body. Survival is.

Our bodies still operate in Stone Age mode – your liver doesn’t know that there’s a Costco down the street with jugs of water or that 50 feet away there’s a faucet with a Pur filter installed on it; if the water’s not in your body, it doesn’t exist!

From a survival perspective, it doesn’t make much sense for your body to break down fat cells for energy when death from dehydration presents a much greater (and more eminent) threat.

So your kidneys say to your liver, “Hold on a moment, boys; let us sort this water thing out before you continue with energy production.” Drats.

Luckily, this scenario’s pretty easy for you to prevent: just drink your damn water!

Because water contains no calories, it can really help you reduce your daily caloric intake if substituted for other drinks you normally have that do contain calories (like sweetened iced tea, soft drinks, and alcohol).

As Mike wrote about in What Are Negative Calories, diluting your calories by making smart substitutions is one of the most powerful strategies in your weight loss toolbox.

Even small substitutions can have a big impact: a study presented at a meeting of the Obesity Society in Boston showed that overweight women who replaced all the sugary drinks in their diet with water lost on average 5 pounds more each year than women who didn’t, even though both groups were following similar diets.

Tally up all the beverages you drink in a given weekend (yes, alcohol too) and figure out the total amount of calories that represents.

If you’re like most folks, you’ll probably total well over 1500 calories. That’s an awful lot of calories you can save just by making one small distinction: drinking only water.

If you don’t work out hard, your results will be sub-optimal. Anything that helps you excel in the weight room will help your weight loss efforts in the long run, and regulation of body temperature by keeping adequately hydrated is one of the best things you can do.

A study from the Australian Institute of Sport found that cycling performance suffered greatly in athletes that were dehydrated, even if they were consuming carbohydrate gels to compensate for energy losses.

What is really striking about this study is that the dehydrated athletes were given easier workloads than the hydrated athletes, yet their time to exhaustion was nearly 30% sooner.

In other words, they pooped out faster, even with easier exercise.

If you’re not giving your best efforts, you can’t reasonably expect to get the best results. So do yourself a favor and stay hydrated during your workouts, ok?

“Enough with the studies already! So where do you start? How much is enough?”

The best starting guideline is to drink as much water as you can tolerate – in most cases, we’ve found that this will almost be enough. A good baseline level of water consumption is the tried and true 64 oz of water a day.

You should seek to progressively increase your water consumption a little bit each week (much in the same way you’d increase the poundage on your squat or bench press), up to consuming an ounce of water per pound of bodyweight, or one gallon (that’s 128 whole ounces, folks).

As a point of reference, Mike and I both carry around and drink a gallon of water each day (although I am physically smaller than Mike, I lose tons of water during my jiujitsu training, so our daily intake is similar).

It’s the biggest point of frustration to a weight loss devotee to “be doing everything right” and not seeing the results translate to fewer pounds and less inches.

When you’re looking to optimize your fat-burning and weight loss, do everything you can to “get the little things right.” That includes getting enough water. 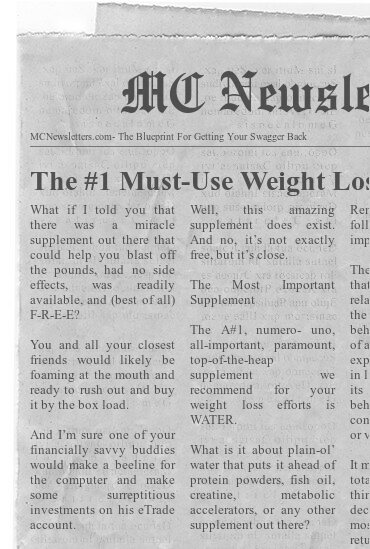 Article Name
The #1 Must-Use Weight Loss Supplement: WATER!
Description
What is it about plain-ol’ water that puts it ahead of protein powders, fish oil, creatine, fat burners, or any other supplement out there?
Author
Eugene Thong CSCS
Publisher Name
MCNewsletters Publishing
Publisher Logo