For best results, it’s better to stick to maximizing your exercise efforts and eating right, than trying to burn more calories through adding extra exercise.

But, there’s no reason we can’t share four of our favorite tricks to up the ante (and the calorie burn) on the exercise you should already be doing…

1. Use your rhythm and work out later.

Are you a night owl or an early bird? Do you get an energy lag during mid-morning, or a do you experience a pre-rush hour slump?

Our bodies operate on a cyclical energy flux called Circadian rhythm. It determines many of your physiological processes, not the least of which is your natural energy cycle.

By following your Circadian rhythm and planning your workouts when you have the most concentration and energy, you’ll be able to get more out of your workouts.

Studies show that athletic performance tends to peak when our core temperatures peak. This occurs in most people in the late afternoon/early evening.

2. Take it slow and lower with control.

Whether you’re new to exercise or an old hand at lifting weights, the natural tendency is to rush through, fast and furious. But if getting a bikini-ready body is your current obsession, then you’ll get much faster results taking it slow.

By lifting weights slower, not are you in more control of the weight, minimizing chance of injury, you increase the amount of work your muscles have to do. This in turn increases overall calorie burn and fat loss.

A study published in the Journal of Medicine and Science in Sports and Exercise found that resistance training that caused increased muscle damage (microtears in the fibers, not injury) such as eccentric contractions resulted in an increased resting metabolic rate up to 48 hours post-exercise.

Take it slower and work those muscles hard – and it’ll fire up your fat burning furnace, even at rest.

One of the most effective fat-burning workouts is the whole-body circuit, where you work continuously by going from one exercise to the next without taking a break.

But to really boost the booty burn, perform an alternating upper and lower body circuit – the PHA circuit.

The PHA circuit we detail in our programs further increases the calorie burn through its program design.

By alternating upper and lower body movements in a specific order, you’re able to target your muscles more on each exercise, and working harder means you burn more calories both during and after the workout.

You just might start spending your time in Athleta gear 24/7.

What commonly available substance is a potent fat burner and contributes to athletic performance so much that it was formerly banned by the International Olympic Committee?

The answer – caffeine. Too many double espressos, and there goes your gold medal.

Caffeine is a thermogenic substance, meaning it speeds metabolism. In addition, it frees up and mobilizes fatty acids for energy use, doubly increasing fat burning.

As if the thermogenic properties of caffeine weren’t enough, consider the performance boosts – researchers in Canada found that ingesting caffeine prior to a workout improved endurance, exertion, and recovery and decreased fatigability by up to 30% in each category.

Translation: Ingesting some caffeine before your workout will supercharge your work efforts.

Small print warning: Your body does build up a tolerance to caffeine’s effects.

So save your caffeination for right before your workouts, and try to reduce your overall coffee intake, especially later in the day. Or – for those of you who are early birds – you could coordinate your workouts with your morning Joe.

You can take caffeine in your delivery vehicle of choice, but we often recommend using caffeine tablets as they are the easiest delivery method and easiest to calibrate in terms of dosage.

Although the Canadian researchers used a dosage of 5mg per kg of body weight (or 330 mg per participant), this dosage will likely be too high to start.

We recommend starting with a smaller dosage of 100 mg (or about the amount found in one cup of strong coffee) to start with to minimize gastrointestinal upset. 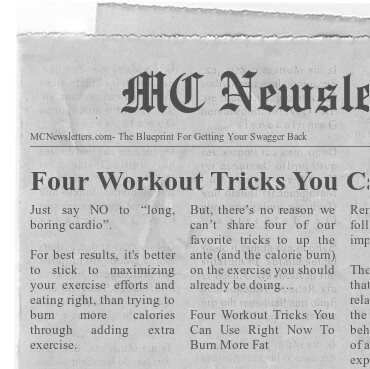 Why is Water Beneficial for Weight Loss?

How To Get Rid of Belly Fat

What Causes You To Gain Weight?