I recently stumbled across this documentary show by BBC called Super skinny me which was part of a documentary series on various topics.

Two average-size journalists (size 8) who are fairly well adjusted and successful are challenged to fit into size 0 jeans. They are put through various diets from liquid fasts, to high protein to low caloric diets.

In addition, they also engaged in vigorous exercise schedules for a total of five weeks. Weight loss was a success but some very interesting psychological effects can really teach us about how a diet mentality can be really harmful.

YOUR MIND ADAPTS, as the caloric intakes were reduced, the girls quickly got used to it. Their feelings of hunger actually became a normal “feeling” in their lives.

One of the girls actually described this feeling as kind of energizing. So the constant feeling of hunger gave the illusion of energy, although they had none to expend.

At the same time, their BMR (basal metabolic rate) was lowering because their bodies were trying to slow down their metabolism to hold on to their fat. This begins the first part of a bad relationship to food.

THEN COMES GUILT, even though both women realized that the low calorie diets were absurd and not possible to live on long term, they gradually yet quickly began to change their view of quantity.

Once they got used to really small portions or liquid meals, and it was time to return to normal eating, they were. First they felt guilty, and greedy about the normal portions, and felt the need to exercise very profusely afterward.

In addition, they became used to such empty stomachs, that any ingestion of food felt colossal. They began to have feelings of purging the “fullness” they felt which they described as uncomfortable to painful.

THEN COMES ANXIETY, and a compulsion with their food. Their relationship with food has begun to change, and food is viewed as the enemy and an obstacle to their goal, which over time becomes weighing less and less.

Food becomes something to control and becomes an overwhelming anxiety in their daily lives. Despite the effects of malnutrition and fatigue, they are urged on by the need to weigh even less.

The extreme of these symptoms can lead to anorexia but lesser versions of these feelings toward food can result from just a short term bout with a very low calorie diet.

Remember, these ladies were dieting for only five weeks, but it was plenty of time to produce these psychological effects.

The readjustment period can be difficult; it takes a loss of control over the food, and a revelation that it can be harmful to your health.

The toughest part is gaining some of the weight back and not feeling compelled to resort back to the diet.

The best advice is to avoid these diets altogether, because they offer no long term results and are extremely hazardous to your body and mental health. 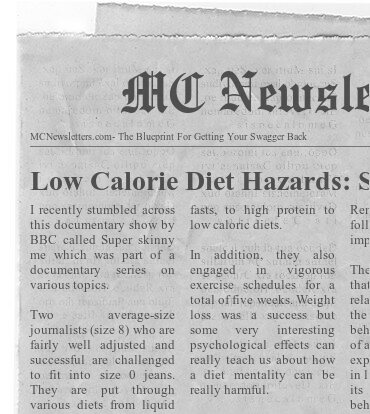 Article Name
Low Calorie Diet Hazards: SUPER SKINNY ME
Description
The toughest part is gaining some of the weight back and not feeling compelled to resort back to the diet.
Author
Fiorella DiCarlo RD, RDN, CDN
Publisher Name
MCNewsletters Publishing
Publisher Logo

Why is Water Beneficial for Weight Loss?

How To Get Rid of Belly Fat

What Causes You To Gain Weight?